There’s something about the end of one year and the beginning of another to make me pause and reflect. The older I get those thoughts are often anchored in the distant past. The minutia floating around in my brain is amazing. For example, this morning my eyes happened to rest on this old soap dish, and it triggered all sorts of memories. 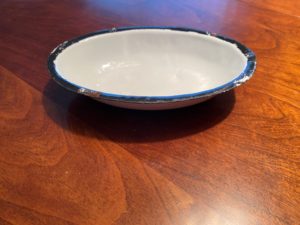 I thought about the various brands of soaps that rested there. In the 1920’s was it Palmolive or maybe Ivory? It was without a doubt whatever was the cheapest because the soap dish prevailed through the depression and on into the next millennium. I wonder how it lasted through the years as it is not particularly pretty, but it does have utility. It is not china, it isn’t depression glass, it isn’t made of anything I would say is a precious collectible material. I’m not even sure what it is. It looks like a fine porcelain, and has a sort of classical look in white with a blue lip. The legs are white bumps protruding from the base. It screams useful.

The original owners of this classic were my grandparents. They separated and then divorced so the the original depository of the dish – the farm – was sold. Mom says that the contents of the farm were boxed up and for a time stored at the neighbors’ house. It wasn’t long before those personal items were lost when the house they were stored in burned down. How did the soap dish survive? It must have been among the items not stored but taken in the move to the next location. It was needed in the new house so it survived. Utility saved it.

It was a good soap dish. What are standards of measure for soap dishes anyway? How is a soap dish everything a soap dish should be? It should keep the soap separated from the counter surface near the sink in order to keep the area neat and the soap contained. The size should be about the same as a bar of soap. The material it is made of should easily rinsed of soap residue. It should be nice to look at, but at the same time somewhat nondescript. I think a soap should blend in with its surroundings and not try to be a focal point of a room. This soap dish meets all the requirements, and that’s what established its unbroken relationship with the family.

The core family was broken, but the pieces lived on and washed their hands and placed their soap back in one of the only constant things connecting them with a memory back to better times. My mother once reflected that when the new man in her mother’s life washed his hands and put the wet soap back in the dish is seemed blasphemous somehow. How dare he so casually use the same dish their dad had used. “He’s not our dad”, she thought. “We don’t even like him.” But that’s ok because he wasn’t around for long and her mother moved on to the next one.

The dish prevailed beyond grandma’s lovers. It was there through thick and thin. Mom said that every once in a while when she picked the soap out of the dish a flash of farm life would appear in her head, and it put a warm happy spot in her heart.

If the dish could talk it would tell about the farm where it first lived in the alcove by the sink right next to the pump that did not work. Water was hauled from the outside pump for everything from cooking to baths and clothes washing.

It was brighter next to the sink in the house in town. There was a window over the sink to bring in the light, and when it was open a nice breeze came through to dry out the wet and make the soap stick to the bottom of the dish. When it came time to move from there the dish went with mom’s sister to a wholly new location.

My aunt clung to the dish as a reminder to her of her childhood. A time when she, as next to the youngest, would try to keep up with her older brother and sister while playing tag on the beams at the top of the barn. She thought about the time she broke her collar bone and it hurt to lift her arm high enough to reach the soap dish in that alcove of the farmhouse – the house where she was born. The memory generator moved with her from house to house and from kitchen to bathroom where it remained useful.

To everything there is a season and the keeper of the dish passed on to her heavenly life leaving her friend the soap dish behind. Turn, turn, turn… there will be more stories for the dish to tell. It will weave stories of moves and hands and soaps with smells. The dish will witness people washing hands while singing Happy Birthday twice, placing differing soaps in the dish, and acknowledging to the dish how much it is loved, appreciated, and needed. The dish knows the reason it has prevailed – it prevailed because it is a good and useful dish.

As my thoughts of days past turn to the present reality, I realize my coffee has gone cold, and I will have to hurry to get this letter in the box before the post arrives. I haven’t heard from you in some time, and I am interested in hearing your reflections of years past. I anxiously await your response.