Posted on September 28, 2020 by Administrator 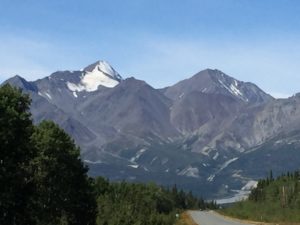 I loved my job as a campground host at Savage River Campground in Denali National Park and Preserve. I met people from all over the world, and I always asked them what made them decide to come to Alaska. The answers were as varied as the people who gave them. One man said he brought his sons to Denali from Israel because he wanted them to see a park that was many times bigger than their country.

I especially loved walking through the campground, and chatting with the guests. The campers had questions about all sorts of things, and there were knocks on the door at all hours from campers with questions.

“Do you have any matches we could use?”

“I feel so silly to have forgotten matches.”

“Don’t. We get so many requests for matches that we keep a supply on hand.”

“Yeah, I’m really embarrassed, but do you have some forks we could use? We forgot to bring eating utensils.”

“How about a knife, or some spoons too?”

“No, just some forks will do.”

“Hi. We are going out on the bus into the park tomorrow, and my camera battery is dead. Could you charge my camera for me?”

“Yes, but only when our generator is running. We can only run the generator between eight and ten a.m. and between four and eight p.m.”

“Could I leave it now and pick it up after eight?”

“Oh, that will be great. Thanks so much.”

“You are very welcome.”

“Hello. We just wanted to ask some questions about the park.”

“Great! One of our favorite things to do is to talk about this park.”

“Do you ever see any wildlife in the campground?”

“Right here in the campground?”

“Yes, when we arrived here this season, we thought it was grizzly bear central.”

Two hours later, the same man pounds on our door. “Please, come right away,” he gasped. “There are two grizzly bears across from our campsite and they are tearing up a tent or something. There is a lady in a trailer on that side, and she is screaming for help.”

My husband, Dave, runs out the door with the bear spray, while I get on the radio to call for bear technicians to come to our aid. They are nearby and soon they are at the site preparing to shoo the bears away if they can. The techs have their guns ready just in case the bears decide they are not going to leave, or in case the bears charge the techs. The techs walk toward the beards guns in hands, shouting at them. The bears decide the fun is over and leave. They tore up the grass rug from in front of the trailer, but no other damage is found.

A short time later, the grizzly excitement over, Dave and I are sitting by our campfire greeting campers out on their evening strolls. The men who reported the delinquent grizzly bears stopped. “I thought you were exaggerating the wildlife the first time I talked to you,” he said. “But now I realize you were not.”

“I could tell by the look on your face that you didn’t believe me; so after you left I said to my husband, ‘Cue the bears.”

“Yeah right. Like the Chevy Chase movie. Too funny.” They walked away laughing.

A week or so later the same man is back at Savage River with his son. “What are you guys doing back here? I ask.

“We went farther out into the park to camp, but we had to come back here just to see if you could cue those bears again.”

“Hi, could you show us how to get our awning to come out?”

“Good morning. How can I help you?

“I’ve got a problem. I don’t know if you can help me or not, but (with his voice breaking up with emotion) my dog died last night, and I don’t know what to do with her.”

“Oh, no. I’m so very sorry. I don’t know what to tell you, but I will find out. I’ll contact headquarters on the park radio and get right back with you.”

‘We have a camper whose dog died in the night, and he wants to know what he can do with the body.”

“We’ll check and get back with you, Savage River.”

“Yeah, we checked and he can’tK bury the dog in the park. He can go anywhere outside the park and dig a hole in the ditch and bury the dog.”

“Are you kidding me? That’s the answer: dig a hole in the ditch?”

“Dave, I am not going to tell that man to bury his dog in the ditch!”

“Let’s give him the number of that nice veterinarian we met. She’ll have a better solution.”

After hearing what we found out for him, the man said he had a reservation at the main campground at Riley Creek that night and would call the vet when he got there and had cell phone coverage.

The next day, Dave and I went to the main camp to do our laundry and to visit our host friends at Riley Creek. Dennis told us that he talked to the man whose dog had died. The vet told him the same thing Dispatch told us. They called the humane society in Fairbanks and were told they could put the dog in their dumpster behind their building. That’s nice.

So, Dennis did a really kind thing. He took his shovel and went with the guy to find a suitable burial spot outside the park. They went out Stampede Road near where they run dogsleds and dug a hole as deep as they could, and gave her a decent burial. Thanks, Denny.