Lessons I Learned Before I Was Five 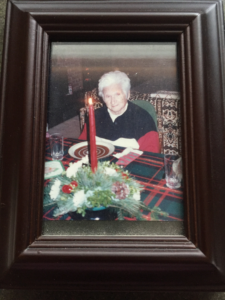 Grandma was the smartest person I ever knew. Her formal education included a degree from Mount Pleasant Normal School, but her knowledge went much deeper. She loved games, and turned every one into a lesson. It could be a lesson in reading, math, or how to get along, but I don’t ever remember her letting me win. I had to earn it.

She often sang as she worked; I remember a favorite of hers was “In the Sweet By and By.” Her Christian faith went deep; she didn’t just profess it – she lived it.

Her father was Prussian, and a very stern man. Her cousin shot and killed my great-grandfather during an argument. Grandma’s cousin went to prison for a long time. When he was released, he had no where to go and no job to support himself. Grandma and Grandpa took him into their home and helped him get a fresh start.

I was very young at the time, and he was scary and strange as I remember. I wondered why my grandparents let this man who scared me live with them. Some in the family were critical of my grandparents because they helped this man – a felon. Grandma said she could never forget what her cousin had done, but she forgave him. She said, if God could forgive him, who was she not to forgive.

Grandpa retired from years of work at the city power company, and it seemed that as soon as he retired he got sick. He was sick for a long time, and Grandma was his nurse. She even missed her beloved church on Sundays when he was not doing well, but her sacrifices for him were given with love.

After he died, Grandma got depressed. This was so out of character for a woman who was always positive and energetic; her mental state was alarming to me. When I asked her, “What’s the matter, Grandma?” She would just hug me and cry. I felt her pain, but had no power to alleviate it.

She finally conquered her depression, and the twinkle in her eyes returned. There were games to be played and children to love.

I learned the most important things about life from my grandma. She looked at everyone and everything with love. I thought I was her favorite for sure, but then I realized that we were all her favorite.